22 Nov One Family’s Story of their LFTT Experience

Posted at 09:16h in The Point by Dolly Glass

One Family’s Story of their LFTT Experience 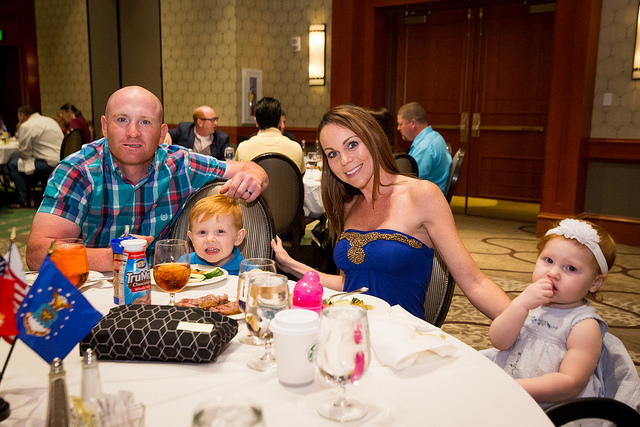 Bobbie Jo (BJ) and Josh O’Dell were invited by Laughs for the Troops founder, Thomas Brown, to take part in the inaugural Funniest Night in America – Orlando and golf tournament. They wanted to share their experience with our readers, and as it turns out, what BJ had to say and how she said it, is so much better than we could have ever done.When we found out that we were invited on the trip, words could not describe how grateful and excited we both were. Josh has been through so much, and life has been very serious for him. For people to acknowledge that and want to help brighten his life, is beyond amazing. Coming into the trip, although very grateful, we were both pretty nervous. We did not know what to expect. Josh was nervous about not knowing anyone and if the people he would be meeting would think he was “enough,” and I was nervous about traveling with a husband with PTSD and TBI. His symptoms are very unpredictable. The Laughs for the Troops organization made our flight and hotel arrangements for us! A family of 4! When we arrived at the Shades of Green Resort on Disney, it felt as though we were surrounded by family. Everyone was so kind, and they just “got it!” We immediately felt at ease. We have never been surrounded by so much love, and by people who truly care. It was so evident how important we were to them, and as grateful as we for for them, they were as grateful for us! My husband and I got to experience Disney with our two toddlers, and we had the time of our lives! Josh was able to play in the Laughs for the Troops Celebrity Golf Tournament, where he played with one of his favorite baseball players (Johnny Damon!) Talk about star struck! That evening we were invited to the Laughs for the Troops Comedy Show, and we have not laughed that hard in years! Josh made the comment that he felt like he was involved in the Make-a-Wish Foundation. And it truly did! We were treated so well by this organization, and met so many beautiful people. Josh was in his comfort zone, which is a HUGE deal. We made a lot of new and hopefully lifelong friends. We feel so blessed to have been a part of this group, and we hope that more veterans are able to enjoy such a hilarious and heartfelt experience.